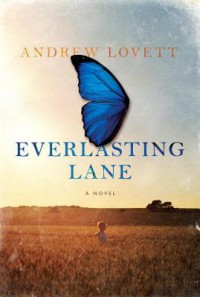 Okay, so I thought this book was going to be great. Stand By Me is one of my favourite childhood movies and seeing Everlasting Lane being compared to it, I instantly felt like devouring the book. If there's one thing you can't do with this novel, though, in my opinion, it's devouring it. It is ridiculously long-paced with rarely any action incorporated in it. And when there has been a bit of action, you can't be sure of whether it actually happened or not.

It started off nicely. Ten-year-old Peter is being taken away by his mother to the countryside, seemingly because she can't take the stress anymore after her husband, Peter's father, died recently. When they get to the cottage, everything is surrounded by a sort of mystery that reminded me of some Hitchcock movies. Peter's mother seems like a dangerous woman or at least, an unkind mother, and Peter is supposed to refer to her as his auntie Kat from now on as their little secret.
When Peter meets Anna-Marie and Tommie, the story flows more into the direction of the particular childhood struggles of making friends, staying friends, and dealing with horrid teachers.

Because of the heat described in the entire book, I had the feeling it was taking place in Australia for about half of the story. Later on, I realised it was just a hot summer somewhere in the UK.
I know it's been mentioned numerous time by then that they moved to Amberley (West Sussex), but since I had no idea where that was, it could've been Australia all the same to me.

The summer mirages are really what make this story. I personally hate summer, but the image of running through fields and woodlands in skirts, sunbeams bouncing off my hair, well, I can work with that.

Somewhere, at about 1/3 in the book, it starts to go downhill as in there is no sense of story anymore. Lots of philosophical dialogues, yes, a few pages of action here and there, but then back to philosophical dialogues again. If this giant snoozefest wasn't enough to deal with, you'd certainly hope the mysteries that surround all the characters are going to be solved.
Yeah, that's a nope right there. In fact, not only is nothing solved, there's an extra layer of mystery thrown over the other layers, making you wonder what the hell it is you're actually reading?
Is Peter a little schizophrenic sociopath? Is he dreaming the whole time? Suffering from PTSD because his father died? Did his mother drug him with some kind of crazy shit?!

There's a little Alice in Wonderland theme weaved through it as well, including a tea party (but with milk) at Mr. Merridew's, who reminds me of the Mad Hatter. He's certainly crazy...like most of the other characters in this book, really. The only character I truly liked reading about was Anna-Marie (and not just because we share the same name). She's feisty and adventurous, which is something all girls should be able to be when they're young (and old as well actually). She wasn't entirely sane either, though...

To sum it all up, reading this book wasn't the most pleasant of experiences. I'm still giving it two stars, though, because the writing style itself was good. There were quotes which set me to thinking about them later on:

"Science I mean. He says it's religion for atheists"

There came a point at which I laughed out loud as well:

"Because it was the last day of term we were allowed to take games or toys (...to school)".

Just when I was thinking that we did the same thing at primary school and I always used to bring Mousetrap with me, I read:

"I'd brought this game called Mousetrap".

This was actually the game which sent my husband on a board game collecting spree because it sucked so much, there must be better games out there, right? Back in the day, though, it totally blew my mind.

Imagine how awesome this looks to a child! Which kind of captures the whole message behind this book (at least, that's what I think) of how children see things differently. How things look more wondrous through the eyes of a child. Just take some old TV shows (with real actors in it) that I used to watch when I was little. If I look at them again now on Youtube, all I can do is gasp at the outrageously bad acting! I'm sure most of you have experienced this as well.

Even with this coming-of-age theme, I would definitely NOT recommend this as a children's book. It's way too complicated and, at times, brutal. It's adult fiction for sure. If you don't mind a little mindfuck and/or like reading things for the sake of pretty word combinations, this is your book. Otherwise, I suggest you spend your time reading something else instead.

An ARC of this book was provided by Melville House via Edelweiss in exchange for an honest review. As a small note ARC-wise I would like to add that in my copy, all 'fl' 'fi' 'off' and 'ff' letter combinations were missing. With makes the word reflection, a word which is used pretty often throughout the book, quite interesting.