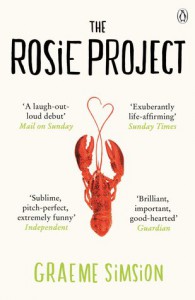 Ten pages in and chuckling several times per page, I thought I was going to end up with giving this book 4 - possibly 5 - stars. I can't really put my finger on what happened after that yet... I still enjoyed it a lot and couldn't stop reading past my bedtime last night, keen on finding out what would happen next. However, the louder chuckles were gone. Maybe I was expecting too much before starting it. Maybe I was expecting too much after the first ten pages. Maybe it just started to get too chick-litty for me. Who knows.

Nevertheless, it was a nice read. I could really relate to a lot of the social awkwardness, being involved in a romantic relationship with an Aspie myself. There was an interview with Graeme Simsion in the back of the book in which he was being asked about the amount of research he did on Asperger Syndrome. I found it hilarious when he said he didn't read up on autism to invent Don, but worked in IT for 25 years.