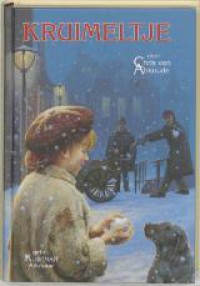 One of the comments here on this book says it hasn't got any Christmas vibe compared to the movie. This is the first time I have read this book (shame on me, because it's one of the more well known Dutch children's classics) and I have never seen the movie. My opinion on it, however, is that this book DOES have a Christmas vibe and a lot of it. About half of the story takes place during winter and there are at LEAST two chapters that involve Christmas and/or New Year's Eve.
Therefore, it was a perfect book to read during the two weeks we get off here during the Christmas holidays.

I liked that the story was set at two totally different locations: Rotterdam city and the Wild West, both shortly after the first decade of the 20th century. Rotterdam included the parts you would expect about a boy living on the streets, making his way through life while being a little rascal(I could really appreciate the lack of cruelty as you often come across in equally themed books; the only time someone really got hurt was when the little boy in the orphanage stood up for Kruimeltje. I'm glad that was only a small paragraph). The Wild West had adventurous excitement, involving revolvers and bandits!

I was amazed on how well the author was depicting America, him being a Dutchman in the beginning of the 20th century. Then, after I finished the story, there was a very nice piece of text about the author's life on the last pages of the book. It turned out he emigrated to the US in 1916 with his entire family and lived there until his death in 1964 (or 1960 according to Wikipedia). He never returned to Holland after settling down in Portland, which I found amazing, because he kept writing Dutch children's books that take place in Holland.

Cool fact is that he changed his name from Chris van Abkoude into Charles Winters, because people in America couldn't pronounce his real name. In Kruimeltje, Charles Winters is also the Dutch writer who was going to write down the story of this little boy. This reminded me of the Pinkeltje series, where Dick Laan was also mentioning himself as just the guy who wrote about the adventures Pinkeltje told him (I thought this was the truth for a very long time).

My final conclusion is that this was a nice book, very entertainable and well suited for your Christmas holiday reads.