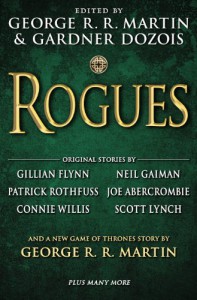 3.5 stars.
21 stories with a roguish element in it. I hardly ever read short story collections. I guess I like well developed characters and don't want things to be over too quickly. Like any other typical woman ^^. I did enjoy this one a lot though, especially since it had mixed genres in there per story and I never knew what was coming next. I'd be reading something and think it was 'normal' fiction and then BAM! it turned out to be science fiction. Or when I was expecting fantasy elements in another story, and there just weren't any. My short reviews per story:

Story 1: 'Tough Times All Over' by Joe Abercrombie. 3.5 stars I already bought his The First Law-trilogy awhile ago, but didn't feel like prioritizing it when it comes to my gigantic TBR-pile. However, after reading this short story which is set in the same world as the trilogy, the trilogy is definitely moving up a notch! It has sweet action scenes with awesome female heroines in it, the writing was good, the handover cutscenes style was pretty cool for a short story, but I do hope he doesn't use it this excessively in his normal novels.

Story 2: 'What do you do?' by Gillian Flynn. 3.5 stars. Great writing style! I initially enjoyed this story a lot. Written straight to the point, it sucked me in. It turning into a horror story was totally unexpected and at about 3/4 of it, it felt SO cliche. However, plot twists ftw, which makes this a 3.5 star anyways. I'd like to read more of Flynn's work now!

Story 3: 'The Inn of the Seven Blessings' by Matthew Hughes. 3 stars This one was a straightforward Fantasy story. It was certainly enjoyable apart from the weak female character. I already forgot her name again, yet do remember she wasn't busty enough to be considered attractive...

Story 4: 'Bent Twig' by Joe R. Lansdale. 2 stars I've read some highly praising reviews on the Hap and Leonard adventures by people whom's reviews I value a lot. Yet this wasn't my kind of story. It felt like one of those standard action movies that people go crazy about, but don't really float my boat. Lethal Weapon comes to mind: it's okay to watch (and I watched all of them), but that's just it: okay.

Story 5:'Tawny Petticoats' by Michael Swanwick.3 stars The first sc-fi story in this collection. Cleverly written and with lots of unconventional zombies in it. Not the best story so far, but I liked it anyhow.

Story 6: 'Provenance' by David Ball. 2 stars I don't think this story is bad, but 2 stars was my enjoyment level. There was way too much info cropped into a short story, it probably would've worked better in a novel. Also, I could see the ending coming a mile away. Not entirely of course, but the main plot twist didn't come as much of a surprise to me. I did wonder how much of it was entirely fiction though.

Story 7: 'Roaring Twenties' by Carry Vaughn. 3 stars It reminded me a lot of the Sookie Stackhouse series. Supernaturals mixing things up in a bar and such. The story didn't blow me away, but it was entertainable.

Story 8: 'A Year and a Day in Old Theradane' by Scott Lynch. 4.5 starsI already had Lynch on my to read-shelf, but no idea I would enjoy his writing this much. This story about a thief pissing off a wizard has yummy magic in it and awesome characters. Loved it!

Story 9: 'Bad Brass' by Bradley Denton. 3 starsTexan crime story with a twist. For a genre I wouldn't read normally, it was pretty good. The humour in it was also a lot better than in the other crime story by Joe R. Lansdale. For me that is of course. I read the author also writes sci-fi. I might try it out sometime, because I liked his writing style.

Story 10: 'Heavy Metal' by Cherie Priest. 2 stars A supernatural story which just didn't grab my attention. Set in the existing Burra Burra copper mine area in Tennessee where strange things occur. My Kindle showed 12 minutes for this one (meaning 24 really):with 3 minutes left, I was still wondering when something would happen and take the story SOMEwhere. Too much background and no pace + where's the rogue element?

Story 11: 'The meaning of Love' by Daniel Abraham. 4 stars Almost as good as Scott Lynch's story. Trouble in a dirty city full of outlaws. Excellent world building, especially for such a short story. At about 3/4 of the book, there was a (for me) hilarious revelation about Asa that she's a he?!. Didn't see that coming at all! I wonder if it was unintentional or cleverly done. Or if I have to reread the entire story again for other clues on it...

Story 12: 'A better way to die' by Paul Cornell. 2 stars I really couldn't get into this story until I was about 3/4 in it. In fact, at about 1/4, I almost gave up on it entirely. The background story was very hard to grasp, because of its complexity; not something to put in a short story. It's probably a lot better if you've read the other Hamilton stories and are familiar with all the world building concepts.

Story 13: 'Ill seen in Tyre' by Stephen Saylor. 4 stars Even though the story was very predictable, I loved the ancient setting. With a twist of magic! It reminded me of an episode of Xena, but with better humour in it.

Story 14: 'A Cargo of Ivories' by Garth Nix. 3.5 stars 3 stars for the level of enjoyment in general. 0.5 bonus stars just for the cute elephant creature which saved the day. A cool story with 2 intriguing main characters: a knight raised by a circle of women and a puppet who's actually a brilliant sorcerer. No Chucky business there ;-).

Story 15: 'Diamonds from Tequila' by Walter Jon Williams. 3 stars Quite a long story, but nicely written. No fantasy elements here whatsoever, but a slightly unusual story about Mexican drug cartels and movie stars.

Story 16: 'The Caravan to Nowhere' by Phyllis Eisenstein. 4 stars A minstrel who's able to teleport goes on a dangerous journey through the desert. Cool story with a roguish ending. I'd like to read more of the author's work.

Story 17: 'How the Marquis Got His Coat Back' by Neil Gaiman. Haven't read this story yet. Not because I'm skipping it, but because I read that it's considered to be a tiny sequel to Neverwhere, so I'm going to read that first! To be continued...

Story 18: 'The Curious Affair of the Dead Wives' by Lisa Tuttle. 3.5 stars A mystery with a touch of the macabre. I enjoyed reading this a lot (maybe even more so because I'm reading a Sherlock Holmes book as well at the moment and this resembles a Sherlock story). Nevertheless, it never really went where I hoped it would. The ending was alright, yet I keep having this nagging feeling of dissatisfaction...

Story 19: 'Now Showing' by Connie Willis. 2.5 stars Not the greatest level of enjoyment for me. I love movies, but got tired of the movie references fairly quick. It didn't take me a lot of effort to finish reading it though luckily, I was curious what would happen and who was the real 'rogue'. Hence the 2.5 stars.

Story 20: 'The Lightning Tree' by Patrick Rothfuss. 4.5 stars Lovely story depicting a regular day for Bast. I wonder if people who haven't read 'The Name of the Wind' would enjoy it as much as the people who have (and liked it obviously). Then again, it IS a stand-alone story.

Story 21: 'The Rogue Prince, or, a King's Brother' by George R.R. Martin. 3 stars if it would've been an 'A Song of Ice and Fire'appendix kind of thing. Otherwise 2 stars, because I don't think this belongs in a short story collection. It's not even a real story, especially compared to all the other ones, but a history of the House Targaryen and such.

I already knew Gaiman', Rothfuss' and George R.R. Martin's work, which is why I started reading this in the first place. Joe Abercrombie was on my to-read list and remains there. The same goes for Scott Lynch, although he's going up my priority list after reading his story. Cherie Priest has been on my to-read list with 'Maplecroft' for a few months now, but after hearing all the praise for that, I was quite dissapointed with her story here. Let's just say that I'm not in a hurry to read it now.

Authors I had never heard of, but are going on to my to-read list as well now are Phyllis Eisenstein, Stephen Saylor, Daniel Abraham and perhaps Garth Nix. And last but definitely not least is Gillian Flynn. I loved her writing style, watched 'Gone Girl' after reading her story in this book and am now very curious about her other work.