The Secrets of the Pied Piper 1: The Peddler's Road 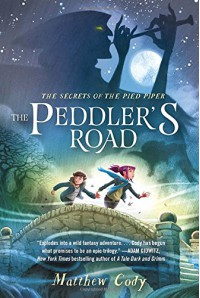 In all honesty, I requested this book on Netgalley right after seeing the cover. I’m a sucker for covers really and this one just screamed “READ ME!!”. Well, to me at least. I didn’t know much about the story in advance, apart from it being a retelling of the Pied Piper of Hamelin. I’ve always been fond of that story, because it’s a tat bit darker and more mysterious than the other stories I used to read as a child. It might be the main themes of revenge and greed, but it also might have something to do with the fact that there are several versions of the story, one slightly darker than the other:

"One hundred and thirty children followed him out of town where they were lured into a cave and never seen again. Depending on the version, at most three children remained behind: One was lame and could not follow quickly enough, the second was deaf and therefore could not hear the music, and the last was blind and unable to see where he was going. These three informed the villagers of what had happened when they came out from church.

Of course, I first read the one where they all drowned, giving me nightmares galore when I was little.

In The Peddler’s Road, the author went with the version of taking 130 children up a mountain into a cave, which leads to a beautiful land called the Summer Isle, where it’s always summer and darkness never really falls. One child remains behind: a lame boy called Timm Weaver.

After the prologue, which describes the background story mentioned above, we meet Max and Carter Weber. Max is a (nearly)13 year old girl in the midst of puberty, drinking coffee and dying her hair pink. Carter’s her little brother who is 10 years old, and has to walk with a brace on his leg, because surgery couldn’t fix his club-foot. Their folkorist father has taken them with him on a trip to Hamelin, Germany, leaving their mother behind in New York.

It soon becomes apparent that something strange is going on in Hamelin and Max and Carter are being lured (IT’S A TWAP!) into the Summer Isle themselves, where they find the missing children of Hamelin still alive and kicking in a village (New Hamelin) they have built for themselves. There has to be a catch to a beautiful island where everything is perfect, right? Of course there is. Occasionally (more often each year) the children encounter a Winter’s Moon. The summer warmth of the island is chased away by it and true night descends, a dark winter that lasts one night only. " But one night was enough, because things crept out of the dark on nights like that, things that shunned the light. Dangerous things."

As the first Winter’s Moon fell in the story, I was pooping my PJ pants a little, thinking “Is this really a middle grade book?”. I thought it was downright scary! And I intend to watch Evil Dead on my Halloween movie night, so I wonder how that’ll go…

The group of Hamelin children have formed a fully functioning community. Their defenses are being led by the Eldest Boy, Lukas. The Eldest Girl, Emilie, reminded me a lot of Peter Pan’s Wendy: " For all these years Emilie had been the one person who’d kept the village together, who’d held them when they had nightmares and told them stories when they couldn’t sleep."…"she’d been New Hamelin’s mother." The children from Hamelin also never age.

After encountering human-sized evil rats on the first Winter’s Moon (yes, there will be more), it appears that most things outside of New Hamelin are wicked and fodder for nightmares (or vice versa when it comes to this book). The only safe place is the Peddler’s Road where the Peddler, an old magician, walks back and forth in search of good trades. The Peddler also happens to be the person who locked away the evil Piper right after he kidnapped the 130 Hamelin children. The Piper’s still imprisoned, but dangerous nonetheless!

Lukas once made a trade with the Peddler, who then gave him a map which seems to be of utmost importance now that Max and Carter have arrived on the Summer Isle. The map came with a prophecy: "Only when the last son of Hamelin appears and the Black Tower found, will the Piper’s prison open and the children return safe and sound."

Without giving away all TOO much, this is where the quest begins for Max and Carter. They encounter more evil creatures of which Grannie Yaga was one who made me poop myself again. Especially with her two sets of artificial teeth: wooden ones for talking, rusty iron ones for… *shudders*.

I’m glad the cover lived up to my expectations; I really liked this book! Again, it might be a bit too scary for a middle grade novel if you ask me, but then again, I still would’ve loved it as a child as well! The characters are likeable (except for Max, yet another female protagonist who is too whiny and hormonal for my taste), the scenery is a treat for the imagination and the storyline’s creative (sometimes a bit predictable, but who cares when the rest is good).

I’m giving this four stars. Why not give 5 if I liked it so much? Because it wasn’t perfect. I made some notes which would be huge spoilers, so I can’t put those in my post, but let’s just say things don’t always add up. I also don’t dig the fact that this, like so many other Fantasy books out there, is a trilogy. I think it would’ve been nicer with a hundred extra pages and then closing up the story. Then again, I’ll probably read part 2 when it comes out anyways, because now I’m all curious about what’s going to happen next. Damn you Matthew Cody!