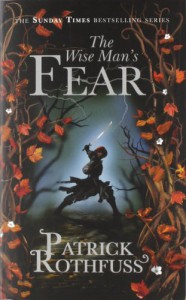 After seeing Rothfuss on an episode of Tabletop a few years ago, I thought of looking into his work because he seemed like a genuinely interesting person. A few days later, The Name of the Wind was on its merry way to my mailbox. My husband picked it up first and finished reading it way before I did. Since I rarely see him so enthusiastic about a book, I considered it a great purchase already. Before I knew it, he had ordered The Wise Man's Fear as well.

When I finally came to reading it, The Name of the Wind turned out to be pretty awesome (here's my mini-review on it). The reason it took me over a year to get on to the sequel was because I never saw the time to squeeze a 1300+ paged book in between my other books, challenges, and whatnot. And I was right about that because it took me six weeks to finish it! Not because it was such a bad or slow read, on the contrary, but because I had to alternate it with reading other books. I can tell you that, with some of those other books, switching back to The Wise Man's Fear felt like a blessing. It made me see what a great writer Rothfuss truly is!

We pick up where we left off in the first book: in the Waystone Inn where Kvothe is telling his story to Chronicler, a scribe who's writing down Kvothe's life story. I was happy to read about his time at the University again.That this takes up the first 40% of the book didn't bother me at all.
What did bother me were some abrupt transitions during and after it which felt a bit like a rush job. There's the one where Kvothe faces a trial against the iron law, apparently a very important event according to the scribe, yet it's all told in a matter of sentences only.

"Chronicler remained seated. "Wait a minute", he said. "This was your trial in Imre?" He looked down at the page, dismayed. "That's it?". "
My thoughts exactly.

A few chapters later, a similar thing occurs. Kvothe is making a long journey to a possibly new patron, but hardly anything is mentioned about it, explained in the book as: "However, as these stories have little to do with the heart of the story, I must pass them over in favor of more important things."

Which seems legit and all, if it weren't for the overly long descriptions of other things. Like living in a Fae's sex den. Which was actually nothing compared to the  Lethani training which takes up about 15% of the book which then translates into about 200 pages...

That's a LOT. If there's going to be some skipping, then I would've liked to see some cuts in that part as well, particularly because I didn't enjoy it all too much.

All in all, it just felt like Rothfuss lost a bit of inspiration and motivation along the way. I thought the first book was better.

That doesn't mean I didn't enjoy this one because, like I said before, the writing...oh god, the writing! It's superb and might make Rothfuss the King of storytelling. Which makes the fact that lots of short stories are weaved into the big story plot in this book an awesome thing. He can describe apples for pages long and you'd still be intrigued as to what becomes of those apples.

Because of this, I'm giving this one 4 stars, half a star less than the first one.

I still hated Denna, by the way, but loved reading more about Devi. Devi's the personification of female success, really. I hope she's going to be kicking some more butt in the third book!