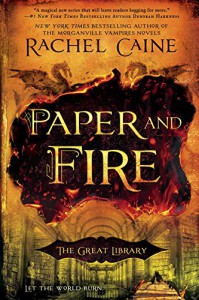 Where to start? After last week's fangirling over the first book, I guess the first thing I'm going to mention here is that this one doesn't have the same quality as the first one. It's still a great read, but not one that gets the full 5 brownies from me.

The story picks up about 3-6 months after the ending of Ink and Bone.


Jess and Glain are both in the service of the High Garda. Khalila and Dario made it to being Scholars, and Wolfe is hauled off to someplace 'safe' because the Artifex and Archivist still want him dead. Morgan's a prisoner in the Iron Tower, waiting for the dreadful 'mating ritual' to create more Obscurists.

When Jess and Glain go on a training mission, something goes seriously wrong. Jess is also determined to revenge Thomas by killing the Artifex, or at least by trying to change the Library.

This book is mainly about the quest of turning the Library into a more open and less evil institution. This is not just your any day kind of quest: it's a David vs.Goliath kind of fight. A small group of teenagers and two adults against pretty much a world-dominating power.

Paper and Fire is a lot darker than Ink and Bone. You can feel the bleak despair and complete iniquity is dripping from the pages.
There's more blood, more heartache and it seems like you can't trust anyone at all.

"The Brightwells weren't a family. They were a business -first, last, always. "

While the worldbuilding is still amazing, there are some things in the story which made me stroke my chin. I've been wondering this entire time what language everyone is speaking. Something which keeps being mentioned (also in the previous book) is that people have accents. Sure, they all come from different countries with different languages, but in which language do they have the accent? Should we naturally assume they're all speaking English all the time? Then, I bumped into this sentence:

"...switched from Italian to the more standard Greek that was the common Library language"

So they've been talking Greek to each other the whole time?? Not clear = not cool.

Another example is when it becomes clear that going to a certain place is a trap. Two pages later "Where are we going?" "To that certain place!". Not to outsmart the trap or anything, nope, but because it seems like the most logical thing to do. That kind of stuff is just completely doing my head in...

Back to the good parts again! While the action started off kind of slow (or, at least, that's how I experienced it), the pace picked up eventually and the story became a rollercoaster of events. Could the automata possibly get any scarier? The answer to this is: yes, they bloody well can. I had nightmares about The Terminator, really. Or Blade Runner. But with clockwork robots here. Someone, please turn those fucking things off!!

Yeah, still scared the crap out of me.

The ending left me cursing out loud (a thing I always like to prevent). Not because it was that bad, but because I have to wait a year (?) to read book 3. I can still definitely recommend this series. Paper and Fire gets four brownies!

Thanks to the publisher who generously provided me with a copy via NetGalley in exchange for an honest review!