This is, hands down, the most disturbing book I've ever read. I honestly didn't know if I would be able to finish it due to its content. I finished it anyway because the tension kept me on the edge of my seat, but now it's just really hard to rate it. Let's see what happens while writing the review!

When I first read about the book, I thought this would be sweet because I truly love me some urban legend. Ghost stories about men with hooks for hands sprang to mind and I was thrilled when I could finally start reading Witchyman.

As I have mentioned in some of my previous reviews, I have a really hard time reading about rape, especially when it's being told in a raw and explicit kind of way. This was raw and explicit alright. The fact that during the first part of the book, the victims are exclusively little children made my stomach turn and I seriously had to put the book down a couple of times because I felt so upset about it. How on earth was I going to rate and review this? Let alone finish it?! Let me tell you this, if it wasn't for the writing in itself and the building of the tension, I would've DNF'd it right then and there.

If I have to describe what this book is about (forget about the synopsis, I'm talking about what the book is really about, and the feels of it), I'd say imagine a more talkative version of Michael Myers without the mask, who's raping his victims before, during, and after he kills them.

I once started a book by Karen Slaughter about a guy who liked to cut a hole into women's stomachs, and then rape them straight into their intestines. I did not finish that book, no matter how many people kept telling me how good it was.

'Luckily' for me, this didn't involve that kind of rape, but it was still just incredibly fucked up (no pun intended). We're talking about a psychopath who can only get sexually aroused when his victim is physically and mentally suffering. And just thinking about that kind of stuff gives him a hard on. Yes, he gets hard. A LOT. Remember the cock diagram I drew a while ago? If not, you can find it here. There's a similar formula to all the rape scenes as well, yet here we can replace cock with 'hard on'/ 'getting hard'. And the rest is just punching and pain.

The murders were a bit more versatile: suffocating, stabbing, strangling someone with a fish line...lovely. Yet that kind of stuff (which is obviously also very disturbing), I can take. I love horror flicks and gore, and even if I'm somewhat scared of knives in real life, I don't 'mind' seeing a person getting stabbed in a horror movie. Heck, I watched all Halloween movies/sequels plus countless of other horror fests.

Getting back to the Michael Myers overlap, I think this still shot of him (up) and the creepy clown from American Horror Story: Freak Show (below) really depicts the kind of tension you can expect in Witchman. 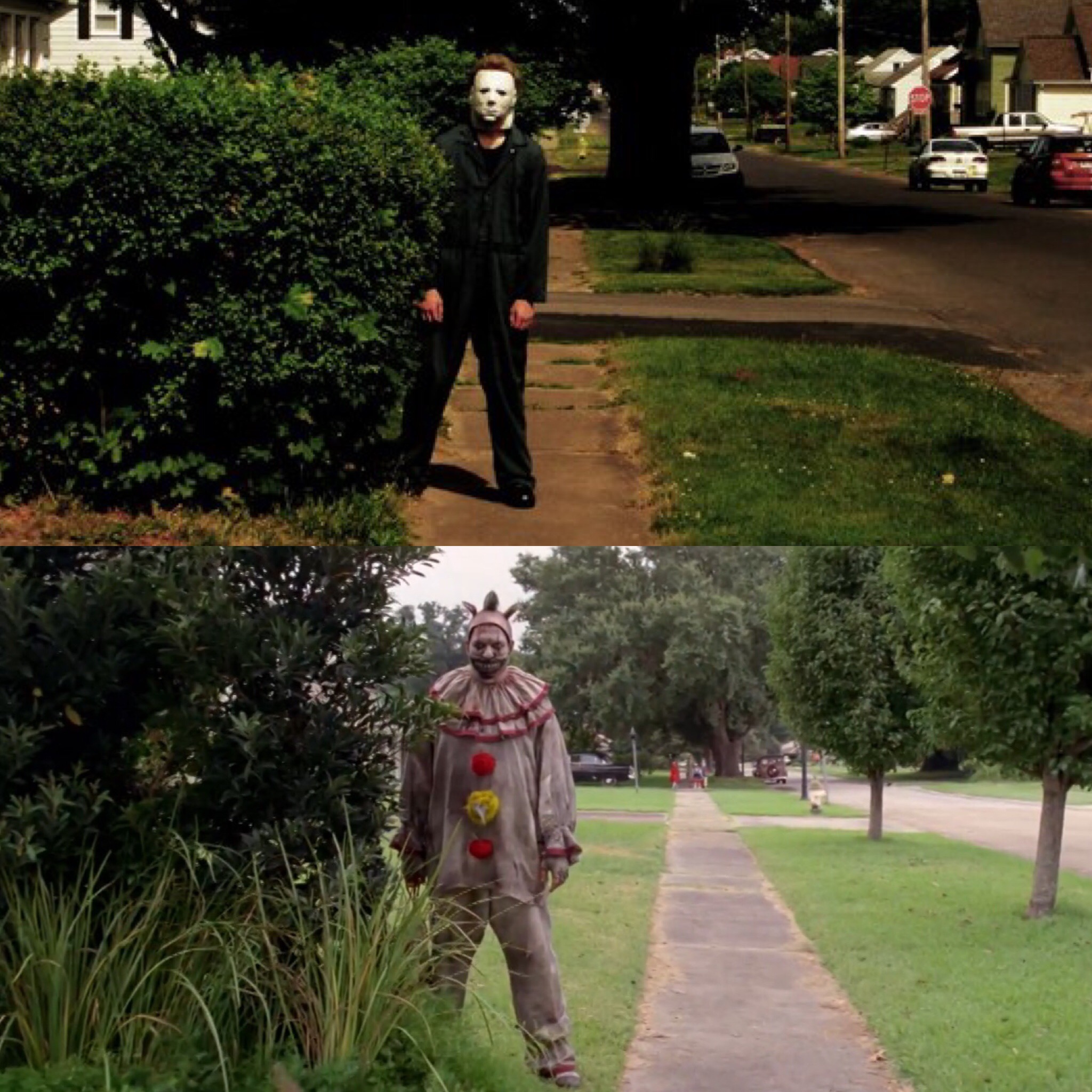 I don't know how these guys do it, but they can always find you. Always. And, of course, there's the therapist who never believes the victim, which is the case in this book as well.

So how was I able to finish it if I had such issues with the sexual content? I already mentioned the writing and the tension. There's hardly any criticism from my side when it comes to the general writing style, apart from the switching of POV's in the middle of a paragraph; that was pretty confusing. Other than that, I wasn't able to tell that this is the author's first novel. The story is disgusting, disturbing and sometimes, quite repetitive, yet you just keep turning them pages! I really wanted a happy ending and let the serial killer/rapist get a taste of his own medicine (a.k.a. DIE BITCH, DIE!!). If you want to know if that particular ending was granted to me, I suggest you read the book yourself *zips lips*.

The story takes place alternately in the fancy suburbs of Los Angeles and the cold harsh climate in Winnipeg. Even though the Winnipeg murders and eery atmosphere there were creepy as fuck, I still loved reading about the forest, the trees in it and the meandering paths inside of the forest. The author did a great job describing the beauty of it all, that's for sure. She was inspired by the Wildwood Park (also in Winnipeg) where she actually grew up and where some similar events took place when she was a little girl.

I absolutely love the forest and this picture of Wildwood Park looks beautiful. However, play some creepy music in the background while looking at it, and imagine it's dark and cold...anything could be lurking around that corner. Witchyman is still pure fiction, though, but...yikes!

The characters: don't get too attached to them. You never know who might die all of a sudden! My favourite character was probably Sheila, though, because she's just such a calm and friendly person. Kris, the main character, didn't leave that much of an impression on me. The big bad guy: yeah, he had a rough childhood. So did a lot of people. None of the people that I know of have turned into a psychopath. Unless they're hiding it really well *looks over shoulder in complete paranoia*

All and all, I can honestly say this was not my cup of tea because of the massive amounts of rape. I know there are some sick people out there in the real world who really are like the Witchyman, and this gives us a brilliant look into their minds, but still, I personally don’t like to read about it. If the sexual part would've been more subtle, though, I most likely would've found it awesome because I dig all the other shit in the story. Sadly, I can't overlook this issue and that's why I'm giving it 2.5 brownies. This is my personal opinion, though, and if you have a stronger gut/less 'crying over killed puppies in fiction'-sensitivity than I do, you're going to love this story.

A big thank you to K.B.Hill for sending me a (physical!) copy in exchange for an honest review!

For a chance at trying out your own ethical boundaries: I'm honoured to be able to give away one signed copy of the book @ my blog.
It's open internationally and ends on the 5th of May, 12:00AM, Amsterdam time (CEST).